As a community-driven open platform, Neo N3's on-chain governance model introduces new, essential roles along with an incentive model to ensure that all participants are rewarded accordingly. 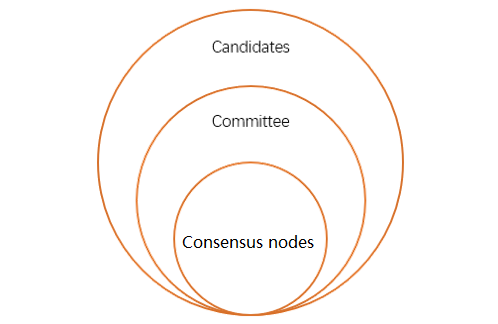 Any and all individuals or organizations can register to become a candidate and seek votes from voters to become a committee member. After the registration transaction has been recorded on-chain, NEO holders can vote for the candidates they believe are best equipped to make the right decisions for Neo. The votes received by a candidate are calculated every 21 blocks as the sum of NEO tokens on all wallet addresses that have voted for that candidate over the past epoch.

To ensure that committee members are truly supported by the community, elections are only effective when more than 20% of NEO tokens are used to vote. Afterwards, a certain number of candidates with most votes automatically become committee members and consensus nodes.

The committee members are elected from candidates with the top 21 most votes. The votes received by a candidate are calculated every 21 blocks, so voters can adjust their voting strategies flexibly according to the performance of the committee.

For any proposal to be approved, over 50% of committee members must reach an agreement before signing a transaction to update blockchain params on-chain.

Moreover, the committee can appoint a number of node roles, including:

Amongst the 21 committee members, the top voted seven committee members also serve as consensus nodes to promote transaction activity and optimize the Neo blockchain’s security. They have the authority to initiate new block proposals and generate blocks.

Similar to committee members, consensus nodes are refreshed every 21 blocks.

Inheriting from Neo Legacy, Neo N3 employs the dual-token mechanism, where NEO is used for governance and GAS is used for payment.

NEO has a max supply of 100 million tokens and the smallest unit of 1, or in other words, is not divisible. NEO holders are the owners and managers of the Neo network. By constructing voting transactions on the Neo network, they can exercise management power, such as electing consensus nodes, adjusting consensus strategy, adjusting pricing model, etc., and can also claim the corresponding GAS based on the amount of NEO they hold.

GAS is the fuel token for the realization of Neo network resource control, with a smallest unit of 0.00000001. Users can obtain GAS either through a claim or purchase. When using the Neo network, they need to pay a certain amount of GAS as network fees, such as transfer, registering assets, publishing assets, running DApps, etc.

Unlike the Neo Legacy, there is no supply limit for Neo N3 GAS, and the system fee for transactions will be burned off.

As with Neo Legacy, this portion of GAS is not distributed voluntarily to NEO holders. It is calculated and distributed to NEO holder’s wallet according to the NEO holding period only after NEO holder has completed a transfer or voting of NEO.

The remaining 10% is used to reward 21 committee members for their contributions towards managing and governing the Neo blockchain. Every 21 blocks (known as an Epoch) votes for committee members are recalculated and the incentive shares are redistributed in turn to new members. In addition, the speaker receives network fees for the transactions contained in the current block.